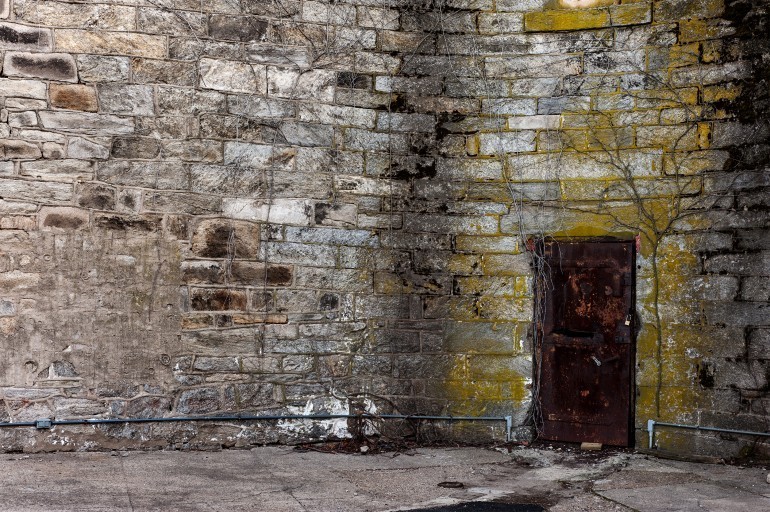 Here you see the rusty red door which exited the Eastern State Penitentiary yard into one of the guard towers of this prison. The door is small and short to slow the entrance of any prisoners trying to rush the guard tower. These days the doors are all sealed shut with rust and padlocks.

This is yet another photo from my last trip to Philadelphia. While we were enjoying the City of Brotherly Love’s historic sites, it was suggested that a trip to the Eastern State Penitentiary was in order. So like good tourists with a great guide, we headed to the former home of both bank robber Willie Sutton and Al Capone.

The tour of the prison was far more interesting than I expected. Turns out this prison, built in the late 1800s, was a revolutionary prison design and Quaker-inspired philosophy. Prior to the Eastern State Penitentiary, prisons were places people went to be punished. The name is, in this case, key to the building. Until the Eastern State Penitentiary, prisons were prisons. The use of the word “Penitentiary” comes from the idea of giving penance. Instead of going to the prison to be punished, criminals were sent to the penitentiary to be reformed.

Prisoners were kept in solitary confinement to think about the wrongs they did. They were able to consult books and ministers but overall, they lived a solitary life. This worked for quite some time, until it became overcrowded. It’s wagon-wheel design allowed for the central prison guards to monitor each hall of the structure from a central point. But as they grew to multiple stories and more wings, and even underground cells, this feature became less efficient.

In 1924, Pennsylvania Governor Gifford Pinchot allegedly sentenced Pep “The Cat-Murdering Dog” (an actual dog) to a life sentence at Eastern State. Pep allegedly murdered the governor’s wife’s cherished cat. Prison records reflect that Pep was assigned an inmate number (no. C2559), which is seen in his mug shot. However, the reason for Pep’s incarceration remains a subject of some debate. A newspaper article reported that the governor donated his own dog to the prison to increase inmate morale.[1]

There are more photos from this beautiful prison to come, as well as more about history of the building.